Be Bold: Seven Ways to Make the Most of Whatever

“I know I was born, and I know I will die. The in-between is mine.” – Eddie Vedder 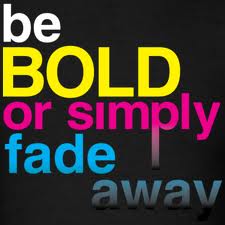 Never before in recent history has vulgar, daring behavior been good advice for life/business/etc. Some may see it as a problem. I don’t. In a world run by dropouts (Bill Gates), potheads (Mr. President), social vagrants (Reality TV), it’s becoming clear that traditional paths to success have become little more than antiquated expectations.

Case in point: Richard Branson dropped out of school at 16, but if he decided to take the top seat at any company in the world, I will bet you that someone will be clearing their desk. Why? Because, love him or hate him, Branson gets it, and got it long before the rest of us were able to catch up. From what I’ve seen, there are a lot of common ideas at work here, and this is how it breaks down:

Now living a life like this can be perilous, and can create some unexpected circumstances, but is there any better way to live?