On April 3, Apple’s mutant iPod hit the market. The sales of the iPad were so overwhelming that they simply ran out, delaying their European launch. Good for them. Apple has shown us once again that, regardless of the staggering global unemployment rate, you can still sell buttloads of stuff that no one needs.

But what lesson can we learn from this? Is it simply that people will buy just about anything? When you consider the success of Crocs and Snuggies, you may have a point. But what I’ve learned from this is that success in sales is far simpler than once thought. Truth be told, the iPad is not much of an invention. Tablet PCs have been in the market for years, as have PDAs. Before them were laptops, and before them were even bigger laptops. What Apple did was take an existing idea and make it better – the same thing they did with the iPod. They took something that was already widely popular and asked the simple question: what can we do to make it better? 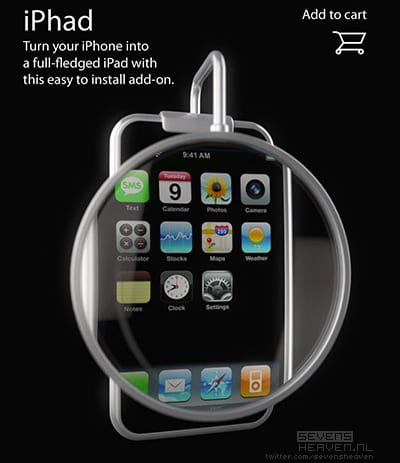 Personally, I think the days of true invention died with the creation of the microwave and the disk drive, and ever since, we’ve been in an innovation age. This makes it far easier for people to develop newer and more exciting things, like automated toilets and paper towel dispensers.

What does this mean for you? Simple. Take a look at the technology in your environment; be it in your car, your kitchen, or your office. Give this technology a good look and ask yourself what could make it better. Developing a brand new idea can be intimidating, so use someone else’s. It’s not stealing, it’s innovation. And as Steve Jobs & Co. has shown, it can make you very successful.