Change your mind. Change the world.

A bit of history to lead this off…

The Republic of India is the oldest existing civilization on Earth, having been around for over 9,000 years. Since its inception, India has produced almost every element of mathematics that the world currently uses, from the counting system through calculus and algebra. India is the only country in world history to obtain its independence through non-violent means, and has grown to become the second most populous country in the world, supporting over one billion people. That’s nine zeros, people. In the very near future, if not already, India will become the largest English-speaking nation on Earth.

But what does all of this mean to us? Very simple. With the aforementioned skills in math and analytics, India can, and will, surpass us in the global economy. Combine that with a lower cost of living – they live much better for a lot less money – and you can see where this is going.

In case I haven’t made it clear enough, imagine that one-fifth of India’s population, 200 million people, decide they want a good-paying career. That’s not a stretch. They can get the same work done cheaper – perhaps faster – than we can here, where we only boast a total workforce of 150 million people. If that doesn’t shake you up, you are hopefully already living in India.

So how are we in the rest of the English-speaking world going to stay relevant? When it comes to careers based on routine process (accounting, law, etc.), you can expect one of two futures: either it will be outsourced or it will be converted to a software, website, whatever, and sold from overseas. We don’t stand a chance competing with our left brains alone. But I’m not writing this to cause panic; fortunately, I have the answer, and it lies just millimeters away from the left brain. We have all come to know it as creativity. 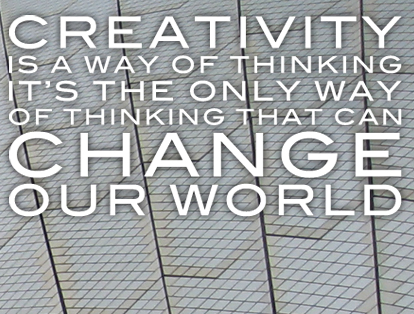 The half of the brain that is dedicated to our emotions, music, geometry and other once considered useless information is now our only chance of competing in the world. This is the only commodity of mankind that cannot be commoditized. This is where ideas spring from, the source of imagination, the seeds of innovation. These are the tools that you need in today’s economy, not the ability to create charts and projections.

The leaders of our economic future will be those that have creative concepts and ideas – it’s made obvious by the economic leaders of today. Take Ikea for instance. Their claim to fame is certainly not quality; anyone that has moved a piece of Ikea furniture from one apartment to the next can attest to that. Their price point, albeit affordable, doesn’t give them much advantage over Walmart and other big-box stores. Ikea offers one thing that there’s a hunger for, and that is affordable design. You can see how Target and other retailers benefit from the same concept.

To a typical computer user, a Mac is just another computer. Only more expensive. It will still get you online, still play your movies and music and, when treated poorly, will still crap out. Even then, you’ll experience a higher cost of maintenance. So how does Apple gain any marketshare? Two words: innovation and design. Steve Jobs has revolutionized the computer market; not by conventional methods of competitive pricing or ease of availability, but through innovation and design, which are the essence of the right lobe.

I could go on ad infinitum on the successful companies that emerge through this new found wealth of business advantage, but I think you get the idea. If you want to compete with Starbucks, don’t focus on making a better cup of coffee, or a cheaper cup of coffee. Focus on creating a better experience. The old rules no longer apply, and we should all be nurturing our creativity as much as we can to send us forward.

But how do you nurture creativity? You’ll have to wait a week for that one…