Design by Committee: Why It’s a Terrible Idea

Getting a piece of marketing developed – whether it’s a business card, a website or an entire ad campaign – can draw uncertainty out of the most confident of marketers. By nature, it’s a predictive and nebulous process and you can’t guarantee much in this industry. As a result, most want to look for assurance from their peers, which is normal. However, when you get “design by committee” – factoring the opinions of anyone and everyone within emailing distance – you get a long, expensive design process, followed by a bland, boring, uninspired project that’s no longer fit to see the light of day. The project’s sole purpose has become to pacify. And while that’s cool for workplace relations, it makes for terrible design. 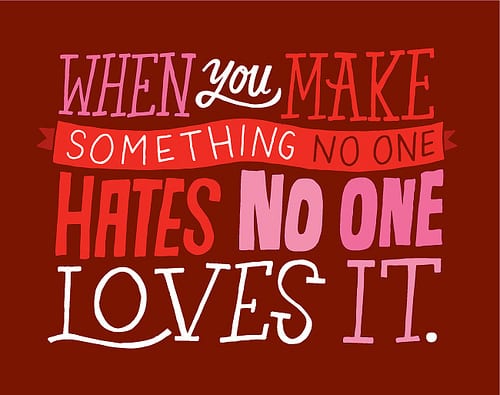 I give you Exhibit A: We were asked to redesign a business card for a client yesterday. The person in charge of the project passed our recommendation around the office to get consensus, to make sure that this was the right direction. As a result, he was met with unending criticism on how it should look – twenty different colors, bold this, unbold this, round the corners, don’t round the corners, put a design on the back, leave the back blank…the whole time, we’re making the requested changes to “just see what it would look like”.

In the end, that sole decision-maker was so completely frustrated, we just went with a remarkably boring design, just so people couldn’t complain about it. The motivation behind the final product became making something that was non-disruptive, and they paid ten times as much for a business card that wasn’t worth the original quote we offered.

This isn’t the first time we’ve had this experience. In fact, we prepare for it by charging hourly, keeping the client aware of how much it costs them to solicit the feedback of people that aren’t even their target market. We’ve responded to the feedback of fathers, grandmothers, spouses, friends-that-took-some-art-classes-in-college, and it always turns out the same way.

Moral of the story: Getting a second opinion is not a bad thing, and we don’t expect – or condone – working in a vacuum. But understand that people like being heard, and are usually pretty quick at offering their opinions, even when they don’t really care that much. The more people that you have in that decision-making mix, the more you’re going to spend on the project. And that I can guarantee.