Back in 2011, Facebook began an ever-evolving process of reducing the number of fans that can see a company’s post in their feeds. While it left marketers and agencies outright pissed, you can’t argue with their business logic:

Unfortunately, a marketer’s ability to rely on organic visibility has only gotten worse over the years. With views now routinely dropping down to below 2% for unsponsored posts, it’s not unusual for a page with 1,000 of hard-earned devotees to have only 20 of them ever notice a single post.

The quickest way to fix this is through boosting your posts (paying for higher reach), but thank your lucky stars it’s not the only way. There is hope – below are a few ways to use their machine learning to your advantage.

Each post can be targeted to a specific audience regardless of whether or not it’s sponsored, which can improve overall interaction with that post among other people who are likely to find it more interesting and relevant. For example, a brewery may want to target beer drinkers in their 30’s and 40’s, so maybe a grunge, old-school hip-hop or Spice Girls reference in a post would speak directly to them instead of a generic “About Us” statement.

In 2014, Facebook’s algorithm began to scan for trigger words in a post to make sure that they’re not overtly spammy, so words like “share”, “buy”, “free”, “sale” and even “like” can cause a reduction in visibility. There’s a long list of words to avoid, but they’re the usual suspects (“promo”, “discount”, “deal”, etc.). However, words like “anniversary”, “congratulations”, and “birthday” can actually improve your reach.

If you’re watching your time of day in Facebook Insights, make sure you’re posts are published in the middle of your page’s busiest time of the day. Note that this doesn’t show you the time of day your posts have been seen the most, but rather how many of your fans are on Facebook at that time. Chances are it’s going to be outside of normal business hours, so get familiar with their scheduling feature. 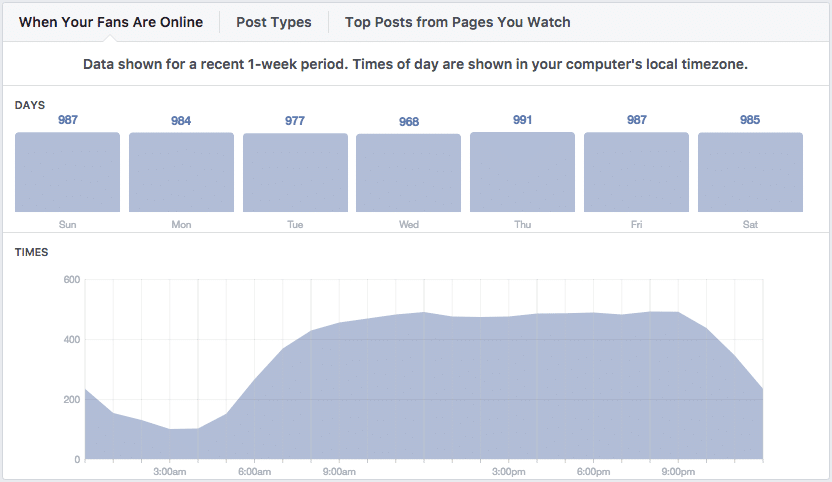 When you’re experiencing low engagement, it’s a bit of a downward spiral. The brands that a person interacts with most will always show up in their feed, while brands they haven’t in a while just won’t, so it can be hard to turn the tide. You’ll need to develop clever ways to get those that do see your posts to interact more often, including a mix of humor and other entertaining posts. In time, their friends will see the interactions and it can grow from there. To clarify “interact”, there is a weight value given to each type of interaction. Shares are the highest, with comments next and likes falling in last.

Do video. I’m not necessarily talking about Hollywood-level production stuff, I simply mean small videos of activities that may happen in and around your business. Those and Facebook Live immediately get more traction based simply on format.

Next, lure with links. Giving sneak-peek posts – or posts with incomplete information that would compel someone to click a link – can be highly effective. For instance, the aforementioned brewery could announce a new beer without saying the name or style in the post, but have a link to their site. That would force fans to click a link to go to the website and find out what it is. This will drive up the clickthrough rate and, as a result, overall post visibility.

In time, you’ll find that one or more of these techniques can ultimately improve your visibility and make Facebook marketing work for you again without shelling out money to gamble on views.