In the beginning, there was HTML. Nimble and lightweight, young HTML ushered in the web design revolution. The people rejoiced, and all was good in the world.

One day in 1993, a savvy team of developers saw that the Internet needed to be more exciting, with more whizz and bang, and therefore conceived what the world would come to know one day as Flash. As with most legendary newcomers, Flash didn’t achieve overnight success. In fact, making friends was hard in the beginning. But eventually, after hard work, and a hefty period of paying his dues, Flash finally received international acclaim, and was seen everywhere online. It was a good time for Flash. Too bad it wouldn’t last.

Unfortunately, in the early 2000s, Flash met his first nemesis, an up-and-coming marketing juggernaut by the name of SEO. The two rivaled from the beginning, with SEO’s demands on Flash to be too immediate and complex, and Flash quickly knew in the back of his mind that his days were numbered. 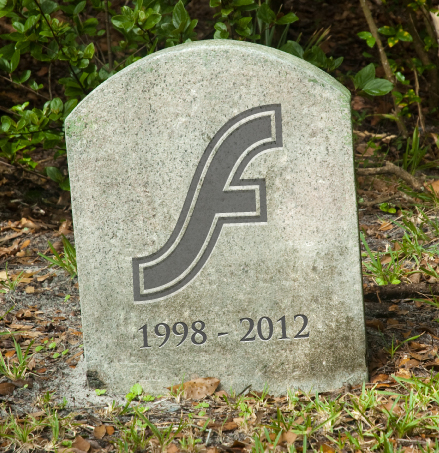 The numbers became far fewer when Flash crossed paths with its next threat – a small, portable device known as a smartphone. The people rejoiced once again, but for the smartphone. The vast Internet was now in the pockets of the people and they discovered that Flash couldn’t cooperate with the smaller screens. There was revolt and criticism towards our hero that couldn’t be remedied, and Flash was quickly forsaken. Never before on the Internet was a brand so quickly abandoned. Well, there was MySpace, but that’s a different story.

Today, Flash is no longer the powerhouse it once was. In fact, he has been disregarded completely for hopeful youngsters like HTML5, jQuery and CSS3. The fame Flash once had is now history.  However, on a calm summer evening, if you listen to the wind, you can still hear the phrases once uttered by clients everywhere: “I’d like a Flash intro to my site.” Flash will indeed live on in the hearts of some, long after its days on the Internet are long gone.