Take your inner child to lunch. 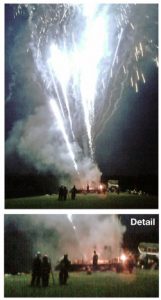 Is it smart to stand
that close to fireworks without protection?

On the Fourth of July, I took my daughter to a park to meet with some friends, which was conveniently located in the center of nowhere. It took two hours, half of a tank of gas, and three stops to ask for directions to find this place that was 25 miles from my house. When we finally got there, my daughter met up with her friends and I chose to walk around the park. I ended up sitting on top of a wooden fence, watching young kids run into each other with lit sparklers. There was something about watching those kids running around in circles, with recklessness on the brink of serious injury, which took me back to a simpler time. As the grown-up fireworks began, I saw a number of large explosions on the ground resulting from rockets not able to take off. The recklessness doesn’t seem to go away; we just get bigger toys.

The following Monday morning was typically hectic, and I had to start my day at 100 miles an hour. I had a half-dozen clients to call, projects to organize, and two proposals to write. In writing my second proposal, I noticed that I left the client’s business card in my car. I rush out to get it and, halfway back to the building, I froze.

Maybe the Fourth of July brought it on, but I had this flashback of a time long gone; when there were no missed calls, no real world pressures or anywhere I had to be. It felt absolutely liberating, if only for a moment. After the proposal was sent out, I scheduled myself a lunch. It was the first lunch I had taken for myself in a long time; one without sitting at my desk or meeting with a client. Instead, I sat under a tree in a field across the street and had my lunch. For that hour, I didn’t think about my next meeting, my next oil change, my next anything. I lay back on the grass and, staring at the sky through the leaves, was transported to a time when doing so was the only appointment I had on my calendar. I took some time to live in that moment and came back to the office more energized than I had been for a long time.

Lately, I guess, we’re all under a bit of pressure, and rightfully so – trying to stay afloat in our careers, our finances, our families. These Consolidation-Now are all things that are important to us and are often hard to maintain. However, it feels pretty good to just stop and put it all aside, if only for a few minutes. You seem to come back to it with a better perspective and sense of control, seeing that maybe things are not as tough as you thought. It’s been said that you should never have lunch alone, meaning that lunch is a great opportunity to meet new people. Maybe, on occasion, it’s good not to. Sometimes, we need to get re-acquainted with ourselves.